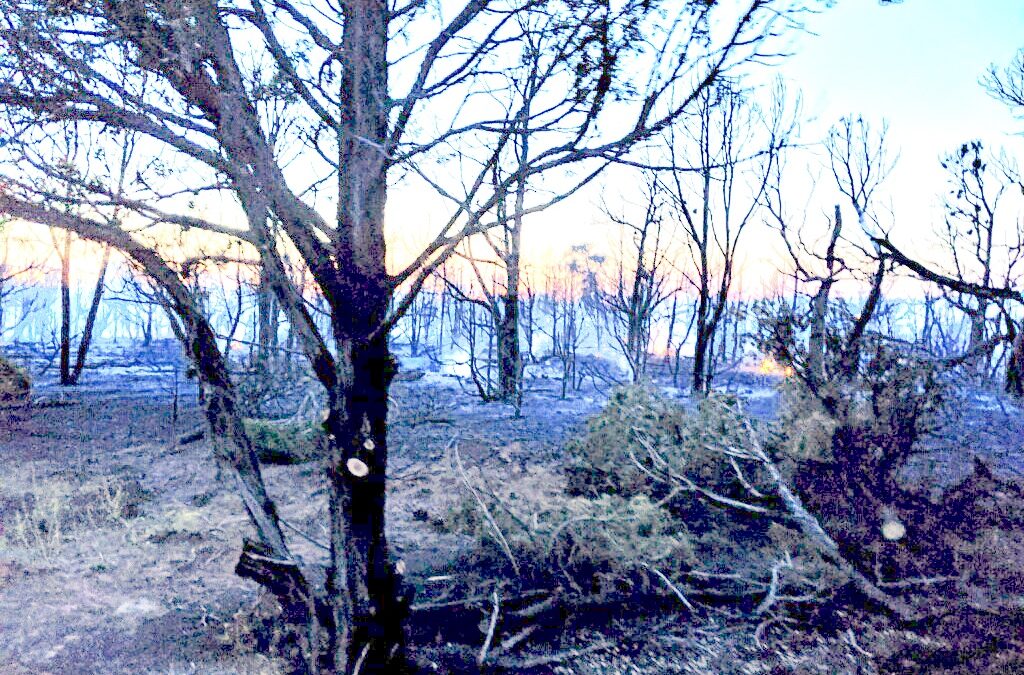 Acres: 43 acres as of July 18 at 1800
Containment: 40 %
Personnel: 75
Weather: Hot temperatures and dry conditions continue. The Red Flag Warning from July 18 has been lifted as winds have significantly decreased in the area. Weather conditions continue to be warm with no sign of precipitation in the near future.
Public Safety: For the safety of the public and fire personnel, the public is asked to travel slowly and use caution in the presence of fire crews.
Closures: There are no closures or evacuations associated with the Nelson Ditch fire.
Planned Activity: An incident command post has been created in Norwood to manage fire operations and is being led by Incident Commander Cody Russell with the U.S. Forest Service. The Single Engine Air Tankers (SEATs) were released from the fire and currently two helicopters, one water tender, and six engines remain. Also, a Type 1 Hot Shot Crew—the San Juan Hot Shots out of Durango—arrived today and will begin to increase the fire line and monitor hot spots in the canyon. Firefighters are going direct and actively fighting the fire as allowed with firefighter and public safety as the top priority. Currently there is a perimeter around 40 percent of the fire. The fire continues to burn through pinyon juniper fuels, with no current growth shown after a recent flight by the Colorado Division of Fire Prevention and Control’s Multi-Mission Aircraft (MMA). The MMA is a Pilatus PC-12 turbo-prop aircraft that is outfitted with state-of-the-art infrared and color sensors that provide near real time information to ground forces on initial attacks on wildfires.
Yesterday’s Activity: The Nelson Ditch Fire was initially reported at 13:43 on Wednesday, July 17, and is the result of a lightning strike. It is located approximately 3.5 miles north of Norwood on Deer Mesa, on public land managed by the Bureau of Land Management (BLM). Initial attack resources came from the BLM, MCSO deputies, San Miguel Sheriff’s Office deputies, Norwood Fire, Placerville Fire, and Telluride Fire Protection District’s Wildfire Crew. There was a large amount of smoke in the area and two Single Engine Air Tanker (SEATs) and one helicopter successfully limited the growth of the fire. A large amount of smoke in the area, combined with smoke from wildfires in Arizona, impacted air quality and visibility in the area. Horses that were initially evacuated to the San Miguel County Fairgrounds have returned home to safe conditions. The limited growth of the fire may also be attributed to fire mitigation efforts in the area by private landowners. This mitigation assistance reduces the number of fuels and creates natural barriers to inhibit wildfire growth. Fire updates will be posted to westslopefireinfo.com.
Homeowners interested in fire mitigation work are encouraged to contact the West Region Wildfire Council at (970) 615-7300 or http://www.cowildfire.org/.
Residents are encouraged to sign-up for CodeRED emergency notification. You may list your home phone (landline) or download the CodeRED app for your smart phone. The best way to ensure your safety is to stay informed and signing-up for automated emergency messaging through Code Red. It is free and the application process only takes a minute. https://public.coderedweb.com/CNE/en-US/BFB7CC4C6C0A